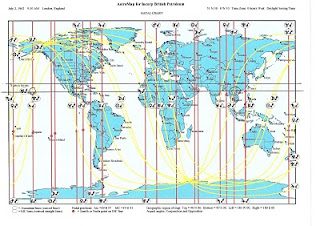 Before I get into BP’s chart and its forecast for April 20, 2010, I’d like to point out a couple things about the above Astro-Map. (Click on the map to enlarge it.) In interpreting these maps, one of the primary indicators is the latitude where the lines cross each other. If two planets’ lines cross, it lights up that whole latitude all around the earth and indicates conditions for the owner of the chart on those latitudes. Some may be quite lovely; others can be disastrous. It is one of the factors we consider when doing re-locality analyses for clients.

I have drawn two lines across the map and circled the crossing place of the planets in question. You will notice that in the Gulf of Mexico, itself, there is a crossing of Saturn (at the MC: vertical red line) and Mars (on the Ascendant: curved yellow line). This means that if BP had been born at that spot, in the Gulf just off the coast of Texas, then Saturn would have been on the MC and Mars on the Ascendant. It also means that the energy of those two planets will “play out” at that location. You can see that a line drawn on the latitude of that crossing goes right through the spill area. Mars on the ascendant is often impulsive and aggressive, and certainly accident prone—especially when in the natal chart it is square Uranus. Saturn on the MC is responsibility in professional dealings among several other things.

Below that line is another one going through the Yucatan Peninsula and the Caribbean. There are two crossings for this latitude. One is in the Pacific Ocean near Hawaii (circled for you), and these two are Mercury and Jupiter. In the BP natal chart there is a square between these two, which is over-confidence. Often when people have this in their natal chart, they are hasty in making judgments, are prone to exaggeration toward the positive, and when connected to the second house, as this one is, then greed can be a factor. And in the natal chart Jupiter also opposes Pluto which rules deep recesses of the earth.

The other crossing is way over in Asia in Laos (also circled for you). Regardless of how far away it is, a crossing affects the entire global latitude it occupies. This crossing is for Mars on the ascendant again, but with Uranus on the MC. This is the “accident” pair. It is noted for impatience, short cuts and defensive arrogance. It is in BP’s natal chart.

First, a natal analysis of some of the company’s issues—this is an incorporation chart for July 2, 1962 at 9:30 a.m. in London, England.

The arrogance and aggressiveness of this company is all over the chart. Leo is rising with Uranus just over the Ascendant, and both are square Mars at the MC. The Sun, ruler of the chart is midway between these two, semi-squaring each. Uranus on the Ascendant is individuality personified. Depending on how it is aspected, it can be a pioneer unafraid to blaze new trails, or a lawless renegade who thinks rules are “made to be broken.” And Leo rising is inherently proud, feeling superior to others (the small people), unless there are other indications to soften it, which in this case, there are not.

Mars at the MC is indicative of aggressive management, and when square Uranus, impatience, as well. The MC is in Taurus, as is Mars, so the main objective of management is money making—not necessarily providing a service or product. There is also a tendency for management to be secretive—ruler of the MC is Venus, which is in the 12th.

BP was born just after a new Moon which means it is in the first lunar phase. This is noted for being very Aries-like, or impulsive, out-going and aggressive—almost adolescent in behavior. Add to this the extreme optimism of Mercury square Jupiter, which also forges ahead with little preparation, and one can see that the company probably did very little long-term planning. All this together is “quick, quick, quick—get it done.” Mercury rules the second house and also the intercepted tenth, so being square Jupiter, spending can be excessive with little forethought—especially for management. So, where does the cost cutting come in?

Saturn is where we look for “limiting,” and it is in the sixth. The sixth house is day-to-day operations and also employees. It is conjoining the south node of the Moon in Aquarius. There is a natural tendency for the company to be cold and inhumane to employees (sixth, Aquarius south node and Saturn opposing Venus). Venus is ruler of the MC, and when in opposition to Saturn in the sixth, there would be cost cutting secretly (12th house) in the areas of day-to-day operations and toward employees in some way.

In addition, there is a tight square between Saturn and Neptune. Since Saturn is in the sixth (employees) and Neptune is in the third (communications) it appears that employees were deceived (Neptune when stressed) chronically.
But here is the kicker: Pluto is 8 degrees from conjoining the Ascendant—a very powerful, forceful entity. Pluto rules the fourth house and is opposing Jupiter, which also rules the intercepted fourth. The fourth house is the foundation upon which something is built—its source of security. Reinhold Ebertin says of the negative expression of these in his Combination of Stellar Influences, “The pursuit of fanatical aims, the desire to exploit the masses (Plutocrats), wastefulness.” He also says on the same page (176) that when this is manifesting (by progression or other technique), the result is: “Loss of social standing and of one’s wealth, conflicts with the authorities and the executors of governmental power (arrest). The misfortune to lose everything.”

Mars is at 25:10 Taurus, and the progressed Sun, which rules the chart, had just reached 25:41 Leo on April 20th, squaring the natal Mars Position. Six months earlier, or even before, the recklessness escalated. Impatience ruled. But the Sun still has yet to conjunct Uranus at 27:52 Leo, so we will see what happens to this company in about two years from now.

The Sun and Moon are both in Cancer in new phase. New phase charts have an Aries quality about them—rushing ahead with little preparation. Mars by solar arc had just conjoined the Sun the year before, and on the day of the explosion, transiting South node was within a degree of the Moon. Solar arc Uranus is about to square the Moon. In other words, the natal Mars-Uranus square is activating the natal Moon of the company chart. The Moon is the ruler of the eleventh and resides there, so there were goals to be met, and this was addressed with extreme aggressiveness and impatience.

I mentioned quotes by Ebertin above. The Jupiter-Pluto opposition was exact within two minutes (progressed to progressed), which would have triggered its manifestation, and transiting Pluto opposed the progressed MC also within two minutes! This can be the beginning of the demise of the company and, at the very least, extreme pressure on the authority figures therein. Transiting Mars was within half a degree of the natal nodal axis and even closer to the progressed nodes—emergency suddenly erupting. But, again, including aggressive behavior, which we have witnessed.

When a progressed or solar arc planet (or angle) changes signs, circumstances change. The solar arc moon had just gone into Virgo a week or ten days before, having conjoined the Ascendant only a month before. It was a critical time, and BP was fully aware of it; hence the “elite” in the company selling off their shares of stock. The transiting Sun on April 20th triggered this by trine aspect, and also trined progressed Uranus which was located at 0:34 Virgo. A new beginning for BP!

But I believe the major indicators are progressed Mars and transiting Neptune. Uranus in this chart is at 27:52 Leo. Progressed Mars, which is natally square Uranus, was at 27:51 Gemini. Even though it’s a sextile, it triggers the natal “promise,” which is the square. Neptune in transit has been contacting the Mars-Uranus square for quite sometime. On this day, transiting Neptune and transiting Uranus were both activating the mid point (in orb) of the Uranus-Ascendant conjunction. Uranus in quincunx—a loss of public trust since it rules the seventh house (the public), and Neptune opposing—public awareness of all their deceptions. Even Venus was in the act, going over Mars and squaring the progressed Sun at the time of the resulting fire and sinking of the rig.

Two days ago (June 29, 2010) a story broke at 9:10 a.m. (NYC) that BP’s employees are suing BP for their own losses. At that time, transiting Mars, at 12:07 Virgo was opposing BP’s Jupiter at 12:41 Pisces. Mars rules the ninth (law suits) and Jupiter generically is justice. Transiting Venus was within ten minutes of natal Venus. Transiting Moon in the sixth (employees) was just past BP’s Saturn. Transiting Saturn was quincunx transiting Neptune, which is closing in on an opposition to BP’s Ascendant. But above all, Uranus, ruler of the sixth, was exactly to the minute quincunx progressed Uranus, a public rupture from the company. This chart is so clear about BP’s character and the event we are enduring, I have no doubt it is the correct one.
Posted by Carole Devine at 6:10 AM