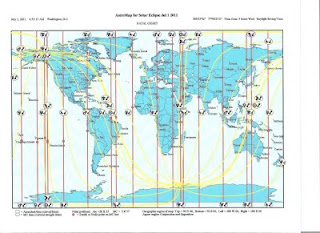 We are having three eclipses in a row in the immediate future: a partial solar eclipse on June 1st, a total lunar eclipse on June 15th and another partial solar eclipse on July 1st. Each one is very important for different reasons. And if you have a position in your chart in the eclipse degrees, this will be a very personal effect for you. Or if you were born 3, 6 or 9 months from these dates, it will affect you, too.
The first one on June 1, 2011 at 5:01:57 pm EDT in Washington DC shows the eclipse at 11:02 Gemini. Since the USA’s Sibley chart has 12 degrees Sagittarius rising, it is very close to opposing the ascendant. That is potent—especially since it is also in range of our 8 degree Gemini Uranus which is holding solar arc Saturn at 8 Gemini also. Uranus represents surprising and unexpected events. Saturn conjunct Uranus is loss of freedom, a feeling there is nothing one can do about anything. We are already into this mind-set, so the eclipse will intensify it.
In the astromap for this eclipse, this configuration is primarily affecting the western part of the US from eastern Nevada to mid-Texas and all regions north or south of that. A Uranus-Pluto-Saturn T-square affecting a region can bring great hardship, and we’re seeing evidence of that with weather already.
The Eclipse chart’s MC, at 6:25 Leo is aligning with the USA’s north node at 6:36 Leo! Plus, transiting Uranus is not only square the USA Venus, it is also opposing the progressed Moon, all in 3 degrees of cardinal signs—i.e. they occupy Aries (Uranus), Cancer (USA Venus) and Libra (progressed Moon). Since Pluto is not far from also activating this configuration, and the progressed Moon will be involved with IT in a couple months, we are looking at a very interesting summer to say the least.
With all that, though, most citizens will continue to see the economy as tolerably stable and be in continuing denial that anything is out of the ordinary. This is because Jupiter at 29:26 Aries is opposing the 0:53 Scorpio ascendant (out of sign opposition, but very close). Jupiter opposite the ascendant is extremely optimistic. And there is a stellium of Venus, Mars, and Mercury in Taurus in the seventh. There could be some grumbling about prices, but so far, there is no outright major rebellion.
Then we come to the eclipse of June 15th. Amazingly, that one has an even tighter opposition of Jupiter to the ascendant—only a three minute orb!! There might be a sudden upsurge in jobs since Jupiter is technically in the sixth house, but Uranus is there, too, which can indicate instability. Neptune in both these eclipse charts is in the fourth house which usually indicates a rainy season ahead.
This eclipse is the strongest of the three even though it is not a solar eclipse, which is normally stronger. This is because, being at 24 degrees of Gemini/Sagittarius, it is the closest one to the ecliptic, shown by the nodes being at 23 Gemini/Sagittarius. The nodes indicate the location of the Moon in relation to the Eclipitc, and this lunar eclipse is closer to it than the two solar eclipses are. Therefore, it is very powerful.
The T-square mentioned above is getting tighter now, and it will be set off by the third eclipse coming on July 1st, (three in a row is relatively rare). Even though it is the weakest since it’s further away from the nodes than the others, it is still powerful for the USA. At 9:12 Cancer, it is close to the USA Sun—in fact, at the midpoint between the Sun and Jupiter, which is affected also by the T-square mentioned before. When you add the progressed Moon just entering this configuration, too, it is going to be a very, very important summer for us. We are in for a rocky ride concerning just about everything.
Don’t be surprised if you see news about earthquakes or other natural phenomenon (or political upheaval) coming out of Alaska. In the Astromap for this eclipse (which is posted above) note all the activity by the T-square, the eclipse, Venus and Neptune all converging around Fairbanks and above Anchorage. Plus, the Mars line is going through the mid-west again as the Vernal Equinox Map showed, and Maine has the eclipse line and Pluto going through it, so that state may have some deep rumblings going on, which could just as well be political as physical.
Rain should be plentiful in a swath from the Great Lakes eastward to Virginia, but more than enough on the latitude that divides Lake Erie and Lake Ontario and 100 miles north and south of it. (I’m just dipping my toe into the weather part of this, so don’t hold me to it.)
We have been predicting the time ahead for many years. It’s very important because it is a clean out and balancing of everything that has gotten out of balance and mighty dirty. Before the calm and order comes back, a lot of dust has to be raised, so rest assured, it’s all for the good, no matter how messy it seems.
Posted by Carole Devine at 7:33 AM