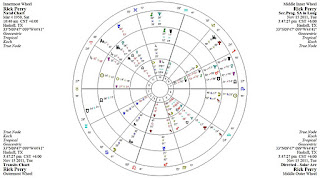 Whenever we look at a birth chart, one challenge is to keep in mind that people have choices all their lives. They can choose to live up to the best of themselves, or reinforce and express their darker side. I first interpreted the second George Bush with an eye to his best potential when he first ran for president, but it soon became obvious that he had not chosen a positive path of growth. Rick Perry’s is a chart like that.

We had a date and place for him but no time. Then an astrologer in Texas called the department of vital records and was able to get his birth time read to him over the phone!! If only every vital records department were that co-operative. He was born on March 4, 1950 at 10:40 am CST in Haskell, TX.

He has placid, not confrontational Taurus rising. The ruler is Venus in Aquarius, and it is trine Mars in Libra which has great potential for compromise—the aspect, not just Mars. The ability to strengthen and exhibit that quality is there. However, he also has Mercury (the way we think) in Aquarius conjoining Jupiter, but in range of opposing Pluto and square the Ascendant. That is a different story. Mercury-Jupiter by itself is optimism, and in the tenth house, the optimism expresses most in his career confidence. He sees himself as very fortunate and deserving there. The Sun in the tenth adds to that. Venus, Mercury and Jupiter are all in Aquarius. That is an emotionally detached sign, when considered as an archetypal principal. It tends to view life as “what is best for the group.” Which group, is the question. Mercury is in an out-of-sign trine to Uranus, the dispositor of Mercury (ruling the sign Mercury occupies, Aquarius), and that indicates very independent thinking without feeling a need for advice—with Jupiter it is exaggerated; opposing Pluto, it is absolute. We have seen this quality blatantly exhibited, and it is dangerous.

Sun in Pisces (the only thing in that sign) is usually kind-hearted, not the sort of energy that executes people and seems to enjoy it. I think he was born a Pisces to learn how to BE one—Saturn is opposing the Sun. It includes the Moon, since Saturn conjoins it in Virgo. That can be very critical and cold—especially with so much in detached Aquarius. But, mostly it speaks to an austere upbringing, albeit with drama and ego involved (fifth house).

What is his life purpose? One lesson is to learn to be less critical and negative and more compassionate. But the main indicator of past life energy is the south node in Libra in the fifth house. This indicates that in past lives he was a person of some importance, used to being respected and admired, but mostly because of his spouse. He chose a well-off spouse in this lifetime, too. He was not used to making his own decisions, however, and so he’s in this lifetime, not only to learn to be “one of the common people,” but also to make his own decisions. As with most issues wherein we are not so skilled, we can see him over-doing it. Like the pendulum swinging too far in the other direction.

Pluto in his chart represents his public persona, since it rules the seventh house. Within the last year, his Moon-Saturn conjunction has moved by solar arc to square his natal Pluto. It calls for a transformation of habits—especially those of habitual criticism and callousness. Whether he is still in the presidential race or not, his progressed Sun will square his progressed Pluto in about five or six months, and he will have a strong lesson about control, power and public perception. It will be followed seven or eight months after that by a repeat of the same thing when the progressed Sun also squares natal Pluto. Sun-Pluto connections are the most life-changing of them all.

Not only that, but his goals radically shifted about four months ago when solar arc Pluto conjoined Neptune, but that wasn’t a strong harbinger of success. Instead, it indicated that he was not clear about what he was doing. That is exacerbated by the fact that Neptune in transit over the last few months has been squaring his 27:55 degree Taurus ascendant. This is about the most confused a person gets in life regarding their behavior. It also can indicate a period of escapism, like drinking too much. In fact, solar arc Neptune has been squaring his natal Saturn-Moon for more than a year, which greatly adds to this problem. I wish him luck, but he’s not presidential material.
Posted by Carole Devine at 1:10 PM