These are very interesting times! A few days ago there was a conjunction of Mars and Saturn at 9 degrees Sagittarius. And now we are about to have an eclipse squaring that point at 9 degrees of Virgo. And there is much more.

I use the Sibley chart for the USA. Even though there are several others, I’ve noticed that there are points in them that could be triggered simultaneously with the Sibley chart, so I have continued to use it. Right now there are many issues going on.

Let’s start with the recent conjunction of Mars and Saturn at almost ten degrees Sagittarius. It occurred on August 23rd and is notorious for “action taken after long frustration.” It is affecting the mutable signs around ten degrees (Gemini, Virgo, Sagittarius and Pisces)….and remember, not just the Sun sign, but any planet or point in the chart that might be near that degree. In the USA chart, it is affecting Uranus which occupies 8:55 Gemini. Uranus in the USA chart is opposite the Ascendant, and is an indicator of “independent” attitudes.

When Mars and Saturn aligned in the sky (from our viewpoint—of course they are in different orbits), they were only three degrees above the USA chart’s ascendant, which is 12:46 Sagittarius in the Sibley chart. Simultaneously solar arc Saturn is opposing it at 13:22 Gemini. Not only that, but the USA progressed Sun is squaring all of them at 11:53 Pisces. A LOT is being affected by the Mars/Saturn conjunction AND the accompanying progressions. But there’s more. In six months the USA progressed Moon will join the configuration hovering around the USA’s ascendant/descendant axis. The month before it does, the progressed Moon will enter the first quarter phase with the progressed Sun.

To top it off, there is an eclipse on September 1st at 9:21 Virgo, which will aspect all of this. It sets up a year of attention to these energies.

What does all this mean? It means that events are converging to upset the status quo. The first quarter progressed lunar to progressed Sun phase is a kind of “revolution.” Those born with it in their charts tend to disagree first—like a knee-jerk reaction—before agreeing on anything. There is a natural tendency to rebellion. Since the Sun rules the ninth (legislature) we’ll probably see a lot of rebellion in Congress about five months from now, and might last as long as three and a half years—as long as the P Moon is in first quarter phase to the P Sun. We’re seeing some of it right now with transiting Uranus squaring the USA’s Mercury/Pluto opposition, and that will be in effect well into 2018. No, we’re not going to just lie down and play dead. Things are going to change!! There is another powerful eclipse coming in Mid-September. I’ll write about that next.

PS:  One more day for August birthdays to have a half price chart. Next, of course, the September birthdays can take advantage of this. 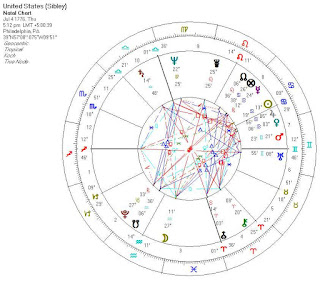