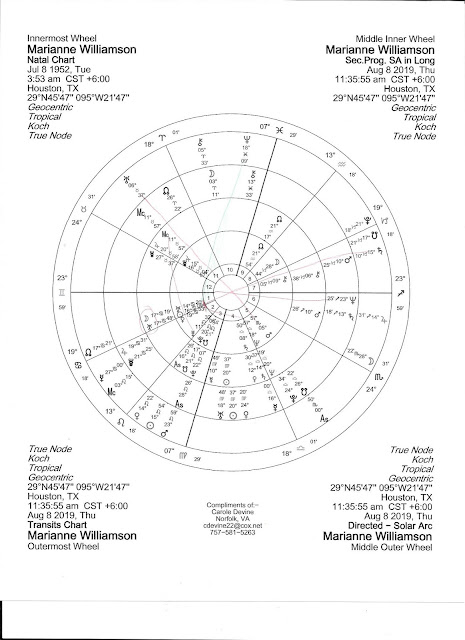 Many people are in the news now, and we are fortunate to have good times of birth for a few of them.  In this blog, we’ll look at the chart of Marianne Williamson.

Marianne Williamson, born July 8, 1952 at 3:53 am in Houston, TX, is a surprise presidential contender (at least, a surprise to me). I had never looked at her chart, and was delighted to find that we have a good time of birth for her.  She is a very independent and strong personality with the Sun conjunct both Venus and Uranus, which can account for her charisma

Gemini is rising, so the ruler of the chart, Mercury, is important.  It is in Leo and widely square Mars in Scorpio. Often that leads to hyper-criticism and impatience. Since Mars is in her fifth house, I’d suspect this would be directed at impatience concerning her own creativity.

Ms. Williamson has been writing about A Course in Miracles (channeled by Helen Schucman) for decades, and it would take Pluto in the third house (square Mars in the fifth) to remain passionate and dedicated to one topic for such a long time.

She also has Neptune in the fifth house (very active  and creative imagination) to aid in her work, but it is square Venus, Sun and Uranus. I have noticed in many politicians’ charts a highly stressed Neptune, which can lead to delusions, deception, confusion, etc. her progressed Moon is going over her stellium in Cancer now, and is almost exactly conjunct progressed Uranus this month. It conjoined natal Uranus three months ago. This is a break from routine and a very exciting time! Plus, it is “out of the box” thinking, as well, so perhaps this is a good time for her to venture into new directions. But, since transiting Saturn is opposing her Cancer planets, it is unlikely that she will get very far in this election.  October 10th, she feels she “has to do what she has to do.” Her lowest point is November 10th.

In just under four years, her progressed Ascendant will conjoin natal Pluto, ruler of her sixth, and I think her attention will shift to health concerns—probably related to the cardiovascular system. It is, of course, possible that it may be hard work and concentration on it, but health has to be considered, as well.