Oscar Pistorius, the handicapped athlete from South Africa, shot his girlfriend, Reeva Steenkamp, in the wee hours of February 14, 2013. He says he thought she was a burglar even though she was in the bathroom behind a locked door. He shot her through the door with deadly aim. His stories have been varied about the details of what happened, and he has displayed extreme dramatic distress in the court proceedings.

Oscar was born on November 22, 1986 at 10:30 a.m. in Pretoria, South Africa. Miss Steenkamp was born on August 19, 1983 in Capetown, South Africa, but unfortunately, I could not find a time of birth. One of the first things I look for between charts is the condition of their inter-chart Mars and Saturn relationship. That pair, when they are connected, can be extremely difficult, but also obsessive between two people. I’m used to seeing it as a conjunction or negative aspect in troublesome couplings, but these two have a mutual trine between the two. However, they are connected, which is a clue that they will definitely have an aspect of some kind in the composite. (A time of birth for Miss Steenkamp would not be necessary for this. It would simply give us more detail.)

However, in my long astrological career, I’ve often found that even though the natal charts might have a positive connection between planets, it might not be so in the composite—and vice versa, by the way. That was the case here. In the composite (no matter what time Miss Steenkamp was born), the composite Mars and Saturn are in opposition. Not only that, but recently, Saturn had been going over that opposition, meaning that it was becoming an issue arousing “conflict, pain, and doubt,” as my teacher used to describe Saturn. Furthermore, Mars is the handle in a bucket pattern—a singleton, thereby becoming a focal point of the relationship.

A negative relationship between Mars and Saturn in a composite is troubling. I first heard about it years ago in the book, Relating, by Liz Greene. What an eye-opener!! We are so used to looking at the Moon, Sun, Venus, Saturn and Mars in love affairs, this pair is often over-looked, and I would never have dreamed it would be the pair describing a “fatal attraction.” I’ve found her assessment to be true after countless examples. A couple in an intimate relationship with such a pairing has the problem of one of them potentially being extremely obsessive. I’m reminded of the movie with that same name (Fatal Attraction) starring Glenn Close and Michael Douglas.

Although I don’t have an exact time of birth for Miss Steenkamp, there are some things that would be true no matter what time she was born. One of the most important was her very close Venus-Uranus square. Even if she had been born far from the hypothetical 6:00 a.m. time I am using, it still would have been a tight square. This is the signature of a sort of “femme fatale” (Elizabeth Taylor had the conjunction). Jupiter is conjunct Uranus, as well, which “enlarges” this and adds humor to it. She probably was a very humorous, teasing and unpredictable person in intimate relationships. I say “probably” because we do not know her time of birth, and there are other modifying indicators, so we cannot be positive about it—and even then, free will can play a part, as well. Venus square Uranus is famous for changing direction in mid-stream—i.e. running hot and cold.

Since Neptune and Jupiter were beginning to activate that configuration, she was probably not declaring undying devotion to anyone. Those energies would be arousing confusion and doubt about her relationships in general. Since Jupiter was leaving an opposition to Uranus, she was using humor to get around issues she might not have wanted to confront. Or she could have been displaying more independence than usual. Furthermore, she had a tight Mercury-Neptune square, which indicates she evaded things she did not want to discuss until she had sorted it all out. She might even have resorted to deception, although I doubt she really wanted to. With Jupiter conjoining Uranus in brutally honest Sagittarius, I think she preferred to be honest—although Mercury square Neptune can be quite deceptive when necessary. Also, at this time, Neptune was transiting long term opposite her solar arc Mars and square natal Jupiter, and she was probably very confused about how she was going to handle all this—not just on this night, but the whole time, in general.

Oscar was born with the Sun in the last degree of Scorpio. (Miss Steenkamp was a Leo, which is not compatible, in general, but Oscar has the Moon in Leo, and so would be drawn to that type. And who knows? She might have Scorpio or Taurus rising, which would make a difference.) Oscar is and has always been an angry man in this lifetime. He has Mars square the Sun, very defensive and quick to have his temper aroused. In fixed signs, it has probably been there for many lifetimes and so, as in most fixed squares, projection has set in. (i.e. “I am not defensive and hot under the collar; it’s YOU.” Or the old, “You made me do it. It’s not my fault.”) Not only is the Sun in Scorpio, but at the mid-heaven there is a conjunction of Venus, Pluto and Mercury in Scorpio, as well. Being angular, it is the strongest part of the chart. This is not light-hearted. He is possessive and prone to jealous outbursts. It does show intense dedication to whatever he does professionally, but in relationships, he’d be hard to deal with if he were to be suspicious or feel threatened. He needs mega doses of re-assurance (Venus conjunct Pluto). With Jupiter square Saturn, his judgment can sometimes veer to fear. And, his stellium in Scorpio squares the Moon in Leo, which would tell of such insecurities with women, he needs vast amounts of re-assurance. He is possessive in the extreme.

In his chart at the time of the murder, his progressed Pluto had moved to exactly conjoin the MC. This is a forceful and thorough transformation of one’s public image, which could happen a myriad of ways. Saturn in transit was in Scorpio going over that stellium showing his insecurities were of concern to him. He was fearful of loss of his relationship. I’m sure he realized his lover was having second thoughts. Saturn was about to square his Ascendant, so he was certainly not happy about the way his love life was going. He was feeling insecure. Even his career was peaking and would soon be waning. Only a few months before, when progressed Venus was conjoining his natal Mercury (ruler of his fifth), he was a very happy, loving person, but with his nature, when self-doubt creeps into his consciousness, he over-reacts, since he has the combination of Venus and Mercury conjoining Pluto and Mars square the Sun. This is jealousy along with angry projection upon whomever he sees as causing his pain.

Also, only a couple months earlier, his solar arc Moon had changed signs for the first time in his life. He was born with it in Leo, and now it had entered Virgo. He began to see women differently. Miss Steenkamp was born with Venus and Mercury in Virgo, and so she would have been meticulous and detail-oriented. It can sometimes devolve into criticism. He does not take criticism well, (although with Moon in the sixth, he can dish it out generously), and with his solar arc directed Moon now in Virgo, I’d suspect he was having quite a bit of self-doubt. With his emphasis so much on Scorpio, he has a need to be in control and confident (Moon in Leo as well), plus he has Mars in Aquarius, which is notorious for “knowing it all.” Virgo has doubts, so it’s probable he was having a crisis in ego and worthiness that was very hard to deal with.

There is much more, of course, like the transiting Sun opposing her natal Sun and a few other things, but until we have a good time of birth for her, I hesitate to do more. If we ever get a time, it would be interesting to see how his transits, progressions, etc. affected her chart and vice versa. That was clearly a past life relationship with unfinished business. # 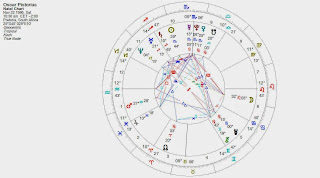 Posted by Carole Devine at 4:24 PM No comments: