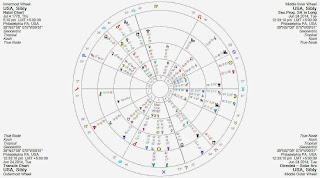 Many years ago, I was deeply impressed by a session in astrology class when we were shown how to see events that would be life changing. It was when patterns or aspects moved by solar arc to conjoin other major aspects or patterns in a chart. Right now, the Pluto/Mercury opposition in the Sibly USA chart has been, is, and will continue to be congruent with our natal Mercury/Neptune square by solar arc motion. In other words, the opposition is now sitting on top of the square by solar arc.

The solar arc Pluto/Mars opposition has been affecting the natal Neptune/Mars square for several years, first Pluto squaring Mars almost three years ago, and conjoining Neptune about 2 ½ years ago. Pluto does not act alone, since in the natal chart it tightly opposes Mercury. Now solar arc Mercury is about to go over this square, as well, which continues the long term drama. Solar arc Mercury will square natal Mars in about ten months, and then go on to oppose natal Neptune in roughly one year and ten months. There should be a huge lesson about deception during this whole time. We are seeing it with the dramas of Edward Snowden’s revelations and many other examples of the insidious reach of spying worldwide.

This is disturbing because Neptune in the USA chart is located in the ninth house, which is where we look to see what kind of Congress we would have. The natal Neptune squares Mars, indicating deceptive behavior. This has been an ongoing issue in our country ever since it was founded, and probably will continue to be so until there is a “re-birthing” of the country, and therefore, a new chart.

Meanwhile, transiting Neptune is now around 7 degrees Pisces and is right in the middle of squaring natal and progressed Uranus. These both rule the third house in the Sibly chart by the Koch system of houses. It’s even transiting through the third house. With all that Neptunian influence, plus Neptune being square Mars, natally, (and Mars rules the fourth house which is the grass roots populace) you can be sure we are being mightily deceived. However, about nine months ago the progressed Sun squared natal Uranus, and a great awakening began. Probably, that is connected to the Snowden affair. It had been in range for about a year before when it was square the progressed Uranus. However, since the Sun rules the ninth, it is possible that this energy reflects the increasingly autocratic behavior of some congressional members.

Meanwhile, solar arc Saturn is now at 11 degrees of Gemini and in about fourteen months will oppose the Sibly chart’s ascendant. When 9/11 struck, Pluto was transiting this chart’s ascendant within minutes, and on March 19, 2003 when we first invaded Iraq, solar arc Pluto was within minutes of squaring it. That’s compelling. This coming Saturn opposition should be extremely important if this is a viable chart. So far, I’ve observed its’ working very well and fully expect a serious turn of events around the later part of 2015. It will probably be economic considering that Saturn rules the second house.

Posted by Carole Devine at 9:41 AM