The Passing of Spock


Leonard Nimoy passed over to the other side on February 27th—in the morning, we’re told, and I’ve been looking at tentative charts for him based on the time the news was released and times that worked for the event.  He, himself, said he had Scorpio rising, and he looks it, so I’m inclined to go with that one rather than the morning chart. The estimate is between 8:30 and 9:00 pm on March 26 1931 in Boston, MA. When I see that kind of estimate, I start with the midpoint, in this case 8:45 pm. I like to use tertiary progressions first in cases like this, since the ascendant (the body of the entity) by tertiary stays in one degree for two weeks to one month, depending on which sign is rising, and was delighted to find that the 8:45 pm time gave him a tertiary ascendant of 26:57 Scorpio with tertiary Saturn squaring it from 26 Aquarius. Tertiary Mars was square natal Mars, as well, and tertiary Pluto (ruler of ascendant and in the T. 8th house) was opposite natal Saturn. Even if he’d been born a few minutes before or after, it would still work. 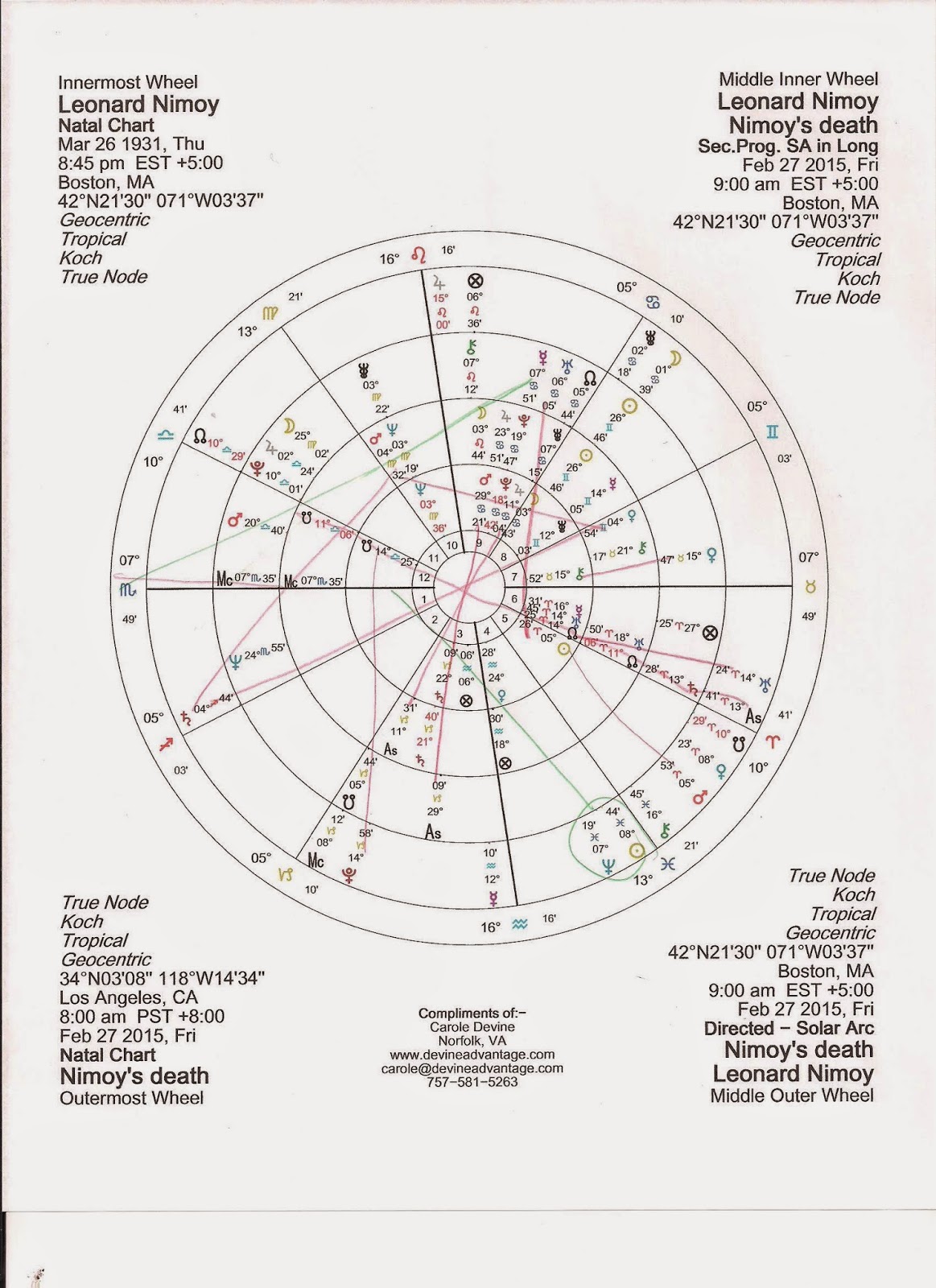 Turning to progressions, solar arcs and transits, it is noteworthy that Uranus was transiting his nodes within one minute from the sixth. (sudden change of environment) And if he had actually died around 9:00 am (which is speculative on my part) even transiting ascendant would have been between that point and solar arc Saturn, as well. Progressed ascendant is opposing Jupiter with this time, but even if the time were a little later, the progressed ascendant could have been squaring any of the sixth house positions.

Another reason I think this is close to the correct time is that the solar arc ascendant (one’s body) is opposing natal Mars (which is triggered by tertiary Mars), ruler of the sixth. That is acute illness possibly occurring suddenly. There were probably earlier clues because Uranus was square the Sun by solar arc about 8 months earlier, BUT could have been obscure until transiting Mars triggered it shortly before his death. It is less than a degree separating from that aspect. Progressed Venus was just separating from a square to his progressed Mars, and they were triggered by transiting Saturn. It was just past squaring P. Mars and about to oppose P. Venus. Most of the time events that show many triggers will occur when a planet is separating from an aspect to one planet and applying to another.

I looked at the chart for Star Trek: Sep 8, 1966, 8:30 pm EDT, New York, NY, and tried to see Spock’s real life passing—since the character would not be portrayed by him again. There were a few items, but the most striking was this: using derivative houses, I see Nimoy’s death as the 8th house from the 9th (death of “foreign” crew member—also the “philosopher” onboard. Of course, ninth could be many, many other things from the show). Eighth from the ninth would be the fourth house. The fourth house ruler is the Moon, and by solar arc, it is placed at 14 Leo 58. Transiting Pluto (death) is at 14 Capricorn 58, exactly-to-the-minute quincunx (showing separation) the SA Moon. Transiting Uranus is 14:24 Aries squaring one and trine the other. Beautiful!!

Also, I realize much of this is speculative, although not by much, but so is the exact real time the soul leaves or enters the body and many other things. :-D  I’m just sharing thought processes.

BTW, I wrote a book about Star Trek, accessible from my website: www.devineadvantagage.com
Posted by Carole Devine at 3:40 PM