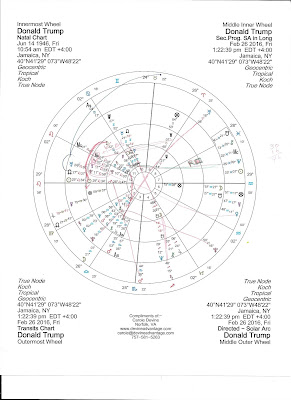 I have two topics this time. One is the importance of times of birth and the other is Donald Trump’s birth chart, whose time of birth we DO know.

I was surprised recently to see an article in a national astrological magazine about many of the candidates for president using untimed solar charts for most of them. For years and years I’ve been ranting about this topic because it is so important.  At the same time, I’ve even been guilty of it myself (but only in private writings like my blog or on Facebook) because you can glean enough to make it tempting to share what you CAN see. However, we keep on using these charts in publications as though it doesn’t matter all that much because we can glean so much from them. Even ads in magazines say “if you don’t know your birth time, we’ll use noon.”  It leaves the impression that a time of birth is not all that important. Well, maybe in some cases, but if we didn’t have a time of birth for Donald Trump, we’d miss the most important thing about him…that Mars rising in Leo square the MC. We would miss ALL of the house rulerships in anyone’s chart. It isn’t just the inaccuracy of the charts that bothers me, though. It’s the perception being perpetrated that it doesn’t matter. I even have people call me to ask for a chart interpretation who think that if I don’t have their time of birth, I can just use sunrise or noon, as if it’s an acceptable substitute.  In that case, I always, without exception, decline to do any paid work with a speculative chart. I’d feel like a fraud.

This became an important issue for me early in my career when I was just beginning to study it—roughly 1969. I was living in Brentwood, NY, and before I went to Lionel Day’s classes in Patchogue, NY, I took a correspondence course from the Rosicrucians. I had a friend who lived around the corner also taking the same course at the same time, so we spoke often and compared notes. One day she called me all excited because she had seen, first hand, the importance of houses. She had adult twins in her family who were born far enough apart that an important stellium in their charts had changed houses. One had it in the seventh house and the other in the eighth. The one who had the seventh house sustainment had just been caught cheating on his wife, and the other, with the eighth house emphasis had been caught embezzling money. The aspects were the same, but the crimes fit the appropriate houses.  In all these intervening years, I’ve witnessed the importance of houses over and over again. Not only do they show the place of activity, but also in a birth chart a planet in a house takes on qualities of the sign that house corresponds to—first house: Aries, second house: Taurus, etc. This is the basis of the late Zip Dobyns’ “alphabet” method of interpretation.  You can probably Google her name to get more information about this.

I’ve been a full time professional in this work since the 1970’s, and have endured insults and disrespect from the general public during all those years. It is not helping our profession to be perceived with any respect when we keep on taking untimed charts seriously just because “we can glean so much from them.” I don’t really believe we can glean enough to keep perpetrating the impression that it doesn’t matter. But I DO believe that if we don’t stop saying that we need a time of birth, and then ignoring it anyway, we’ll NEVER be taken seriously.

Donald Trump was born on June 14, 1946 at 10:54 am EDT in Jamaica, NY. The most outstanding thing about his chart is the last few minutes of Leo rising with Mars at 26:47 Leo just above the ascendant. It also squares his MC at 24:22 Taurus. This does indicate an inexhaustible supply of energy, restlessness, aggressiveness and defensiveness, as well. If he had been born at another time that day, and we did not know that Mars was angular and square the MC, his temperament would be entirely different because it is otherwise well-aspected. For instance, it trines his Moon, which by itself, is very fair-minded and certainly not aggressive. But, the prominence of it on the ascendant—which is what we notice first in people—overwhelms the promise of that trine. Further overwhelming it is the Moon’s opposition to Uranus. If he had been born much later in the day—say, at least eight hours later—the Moon would not be opposing Uranus at all, which would change his habits considerably.

Donald was born just before a full Moon. It is still in the Gibbous phase. The Gibbous phase is focused on perfection and can be hard to please. It might be the source of his propensity for evaluating women on the basis of attractiveness, or giving them numerical values such as “she’s a ‘ten’ or a ‘two’.” Also, he is noted for short changing workers by paying them “cents on the dollar” instead of the agreed on price for work rendered.  A Gibbous phase person can always find imperfections on which to base that. I know from experience because I’m not only a Gibbous phase, myself, but I also have the moon in Virgo. I’ve had to deliberately work on changing that habit. (And yes, I know I’m displaying it here. I think some things are important enough to bring it out and use it.) Only two or three hours later, his lunar phase would be full, which is quite different. That one has a Libran quality of wanting to be fair or eager to compromise. (The TIME of birth is what would change this.) We don’t see any of this kind of quality in Trump unless it is something he does privately.

He has Venus conjunct Saturn, but also square Jupiter.  Venus rules his MC, his profession, but also his third (Koch tables), which is his manner of speaking and thinking. Generically, Venus is also one’s love life and values—which includes attitudes toward money. Saturn can be equated with “brakes” and Jupiter to the “accelerator.” When these are associated with the third house, it indicates habitual mind patterns of insecurity (the "brakes") coupled with excessive pride (the "accelerator"). This is one of the indications, too, of possible manic-depressive tendencies.  Saturn conjunct the ruler of the third is an indication of an inner fear one is not “good enough” or doesn't "know enough," and when Venus is the ruler, is “unloved.” Even if Venus did not rule the third, it is generically a feeling of not being lovable. The Jupiter square to the conjunction indicates over-compensation by having to have the “most” or the “best.” We see it in him every day.  Furthermore, he has a very close square of Mercury to Neptune—only an orb of three degrees. (I wonder what happened to him at age three!) This is possible delusional thinking, sometimes a loose acquaintance with the truth, but, although to be fair, it can be indicative of psychic abilities, albeit not very reliable when it’s a square. When I know someone has a Mercury/Neptune stressful aspect in their chart, I verify whatever they may say if it’s important.  It actually indicates a vivid imagination that has loose boundaries. It can be excellent for writing fiction.

We all know that when someone can “never be wrong” or can never apologize, there is an ego problem. We see this quite a bit in charts with stressed Leo planets or angles. He is a classic example of this, although, once again, if we did not have his TIME of birth, it might not be noticeable at all just from a generic chart.

One thing I find very reliable is the status of a person’s progressed lunar phase. Usually, when it is a new phase, there is a new beginning, and the phase preceding it, the balsamic, is a time of reflection. There are eight of these phases, and you can almost outline a life with them. The balsamic phase is one of reflection, going over the last roughly 24 1/2 to 28 years and asking oneself what was learned. How would we do it all differently?  On April 12th, Donald Trump’s progressed lunar phase enters the Balsamic phase time. It will last roughly 3 ½ years. That is NOT usually a time of new prestigious beginnings, but one of reflection—introspection—no matter how it looks outwardly. His progressed Sun conjoins the ascendant July 25th, right after the republican convention, so he will probably get the republican nomination, but it changes signs, going into humble Virgo, on August 5th. Usually, there is a major personality shift when the progressed Sun changes signs, roughly every 30 years. August 18th an eclipse will be opposing his Mars, and the next day progressed Mercury conjoins progressed Pluto, although he is already feeling that! It’s a major aspect and indicates obsessive, controlling thinking. It can be pretty brutal. If he does get the nomination, whether he wins the presidency or not, he’ll find out that the country cannot be run like a business with an all-powerful CEO. It doesn’t work that way.

The eclipse on March 8th will trigger his Sun/Moon opposition, and it is worth noting that his secondary progressed Uranus is only four minutes past opposing his natal Moon right now. Touchy! Solar arc Uranus is only ten minutes past squaring his natal MC. He’s very nervous about unexpected revelations about events in his business dealings and things becoming public (Uranus rules his seventh). Mars has been in the last degrees of Scorpio and is squaring his natal Mars/Ascendant plus his progressed Sun. He’s about to become very, very angry if not there already.

And last, Saturn is transiting his fourth house. That is not indicative of a pinnacle of success, as the presidency would be. Mars is also transiting there, and the last ten days of August are important because there will be a Mars/Saturn conjunction at nine degrees of Sagittarius. It will quincunx his Mercury which rules his second house (Koch system) and intercepted tenth. I would expect that he tallies his losses at that time and realizes that this is costing him more than he expected.  Since I’m prejudiced in favor of Bernie, I won’t speculate on who wins the election until we know who the democratic candidate will be.