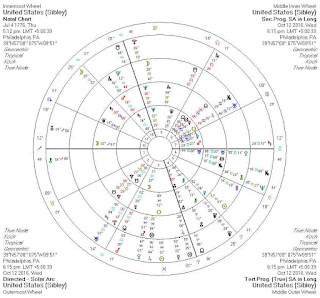 We astrologers are very good at explaining things in hindsight.  From experience, for instance, we have noticed that the stock market seems to have dramatic events in October more than any other month. THIS month is especially dramatic around Monday, the 17th. I’m using the Sibley chart (July 4, 1776 at 5:12 pm in Philadelphia, PA), so if absolutely nothing happens, I’ll have to begin considering others for the USA. It was very dramatic for the 9/11 event and has held up for others, as well, like WWII, for instance.

First, historically, conjunctions of Mars and Pluto very often signal a “break through” whether positive or negative. They will conjoin on Wednesday, October 18th, but on Monday, the 16th, they will be in a position of “straddling” a square to the USA Saturn…i.e. Pluto will have just passed the square, and Mars is about to perfect to it. When an event is shown by multiple indicators, it often erupts when planets are somewhat equidistant from a trigger point. Another example of this is that the progressed Moon has already passed an opposition to progressed Uranus and is approaching an opposition to natal Uranus during this month and next. The progressed Moon moves one degree a month on average, and is right now between these two. That shows a surprise and upset with the populace – the hurricane going on earlier could be one manifestation of it, but that only affects part of the country. Since the Moon rules the 8th house in the Sibley chart, this can be a surprise in the stock market. Tertiary Uranus is also within a degree of conjoining the Sun in the 8th house (investments), and transiting Mars is triggering that over the weekend of Oct. 15-16.

Another concern is transiting Uranus on this very day is exactly-to-the-minute quincunx natal Neptune. That might not be of concern so much except that the tertiary Moon is conjoining natal Neptune, too. The tertiary Moon moves one degree every two DAYS, so that really zeroes in on this date. Just a couple days earlier it was square natal Mars. That particular natal aspect (Mars square Neptune) is a real problem in this chart and shows the tendency to corruption and covert behavior of the government that the country has had since the beginning. This could very well be an exposure of corruption that “separates” (quincunx) the country’s population from trusting government AT ALL (Neptune is in the ninth). And by the way, that square has been activated in some way every single time we have a foreign conflict—ninth house is also foreign countries.

There is much, much more. For instance, tertiary Neptune has been squaring the Sun for quite a while, showing government corruption, plus the tertiary Sun is sextile tertiary Mars, both quincunx the natal MC. The motion of these two last only a short time…one or two months, and at this time, they are just about partile (exact). This is a finger-of-God configuration. It’s a separation of a leader from the masses—a grass roots rebellion of some kind.

Secondary progressed Saturn is trine Venus within one minute, but a trine is probably not how it will manifest because the natal aspect will prevail. Venus is in a stellium which squares natal Saturn. Even if one or more of the planets is not technically in orb of an aspect (Venus and Jupiter in this case), all the planets will take part in it if some of the stellium is in orb. It might take the edge off somewhat, but since Venus natally conjoins Jupiter and by extension, the Sun, it speaks of excess, waste and possible gluttony—especially in the way collective finances (tax money) is handled. Progressed Saturn and Mars are both retrograde which indicates (to me) our “revisiting” controlling and warlike tendencies.  They have both been squaring the Cancer planets for years. This may explain the disappearance of the middle class, perpetual war, and stagnant wages.

And then there are the Solar Arcs

Solar arc Saturn has been opposing the USA ascendant for about nine months, and since transiting Saturn is now going over the ascendant, the financial hardship promised by this is becoming apparent. Saturn rules the second house. Our national profit generation is stagnant. Solar arc Moon has been squaring natal Mercury for over a year showing government mismanagement of the country’s finances….Moon rules the 8th and Mercury is the intercepted ruler of the ninth (legislature).

Interestingly, solar arc Neptune is within minutes of semi-sextiling natal Mars (the semi-sextile operates much like the quincunx since it is the completion of it to 180 degrees), which will activate the Mars/Neptune square, even though it will trine natal Neptune. This is confusion of the masses (Mars rules the fourth and fifth), but also a split between the public (Mars in the 7th) and the government (Neptune in the 9th).  If ever there was a time people will not buy into the propaganda, this is it. Not only that, but the Midheaven changed signs a little over three months earlier which changes the type of president we’d be electing, or how the government will be manifesting.  If we don’t have a real change now, it will be extremely disruptive when the MC reaches natal and progressed Uranus in seven to eight years. And even if we do have some change now, it will really be a “revolution” when that aspect occurs anyway….of course, it all depends on whether or not this is a valid chart for the USA. A dramatic aspect like the progressed/Solar arc MC conjoining Uranus will tell the tale.

Posted by Carole Devine at 3:18 PM