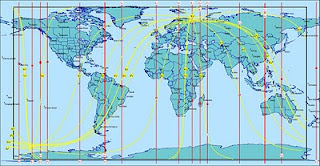 Let’s start with the chart for Egypt which is set for June 19, 1953 at 1:30 am in Cairo which is when the proclamation of the new Republic was read over the radio by General Neguib (Campion: Book of World Horoscopes). I have no doubt this is the correct chart in light of recent events.
There are several themes. One is the progressed Sun is conjoining the progressed Pluto, and on the day Mubarak stepped down, the transiting Sun was opposing this. The progressed Sun (and the transiting Sun) was in good aspect to progressed Saturn. The Sun-Pluto conjunction closes in six months, the time of the elections. Progressed Jupiter was also within a degree of squaring natal Moon, which is not partile yet. That shows a little too much optimism right ahead. However, real change is coming since the Sun-Pluto progression is a dying and rebirthing indicator and the progressed ascendant is less than one month from changing signs. The country’s persona is emerging into a new energy.
For the last year—maybe more—Pluto has been opposing the country’s Mars at 3 Cancer. Pluto in this chart has a great deal to do with fairness and justice since it rules the intercepted seventh house. Mars rules the Aries ascendant, so the people are naturally expressing rage about this. Rage is a hallmark of Pluto-Mars.
Egypt, like the United States is having a Saturn return, as well. The two years before a Saturn return is complete are full of stress if the entity owning the chart has issues to resolve. Things that need revision are revealed one way or another. Saturn, at 17 Libra, was also square the chart’s Uranus at 17 Cancer, an indication of having to do what is necessary.
Egypt’s Mercury is at 20:58 Cancer, and the secondary progressed Uranus is at 20:50 Cancer, both only a degree from the fourth house cusp (the grassroots populace). This is an indication of free expression and independence of thought, but that’s not all. Transiting Uranus was squaring the chart’s Sun all during January. It is literally a “declaration of independence” and often called the “divorce aspect.”

Mubarak
I don’t have a time of birth for Mubarak, and those of you who know me know that I hate doing an untimed chart. But, there are some things going on that do not require a time. I believe however, that Leo rising is not out of the question. On the day he left, if mid-Leo was rising, the progressed Moon was opposing progressed Mars, which fits the scenario. Further, transiting Mars was square both!
Solar arc Pluto was opposing his natal Uranus (death of freedom –for him!) and transiting Pluto was square the same place. Transiting Saturn was square his progressed Pluto and solar arc Venus. Since the Swiss banks froze his assets, this can be the indicator of economic loss.

Astro Map
The astro map set up for the eclipse on January 4th for Cairo, shows that the Uranus-Jupiter conjunction, which was rising in the eclipse chart, is just to the east of Cairo. The Sun/Moon line is conjunct the MC and running through Saudi Arabia and Yemen, and, being square Saturn in the eclipse chart, the Saturn line crosses it over this area. In the Atlantic Ocean the Pluto and Saturn lines cross setting up a sensitive latitude that runs just south of Cairo, all through the north African countries, and is close to Bahrain, as well. The Neptune line runs straight through Tunisia.
The Uranus-Pluto configuration’s promise of upheaval and rebellion is off and running for at least the next seven years.
Posted by Carole Devine at 1:38 PM