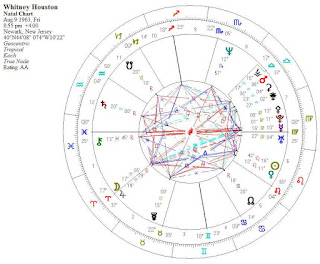 The world is stunned and shocked by Ms. Houston’s sudden death. A lot has been written about it, and I suppose every astrologer noticed that transiting Pluto was square her Mars, which can produce a great deal of tension leading to possibly relieving it through medication. Also progressed Saturn was retrograding very close to opposing her natal Sun—a bit of depression there, but she was born with that aspect, so it wouldn’t have had a major impact. However, with Neptune forming a T-square with it, a signature of self-doubt and escapism is part of her character.

What is really interesting is what we discover when looking at midpoints. She had several midpoints at zero degrees in mutable signs, and Neptune, which just entered Pisces (a mutable sign) this month, triggered those. I’m quoting from Ebertin’s book, “A Combination of Stellar Influences.” First, the Mercury/Saturn midpoint at zero Sagittarius was being squared by Neptune:

“A state of depression, distrust, emotional inhibitions…..plans without any prospect of realization.”

Also in that same place she had the Saturn/Pluto midpoint squared by Neptune:

And additionally in that same degree she had the Neptune/MC midpoint. It was being triggered by Neptune, itself, so there is no combination including it; however, the meaning of the midpoint, which was part of her basic character, is:

“Aimlessness and lack of purpose in life, a lack of self-confidence” and “Depressive psychoses, mental disturbance….”

Additionally, she had a midpoint “tree” of Mars=Uranus/Neptune, which Pluto was triggering with its transit. That one means:

“…the abandonment of resistance, the necessity to give in, great losses, calamities, catastrophes.”

There is a great deal more, but Cosmobiology (which this is) is very detailed, and it would take a long article to examine all of it.

Her chart shows a person who was a perfectionist and had a great need to be successful just to justify her being here and drawing breath. In recent years, with her voice deteriorating, it is not surprising that she was questioning her future. She thought deeply about things in great detail and was very hard on herself, feeling an all-pervading guilt about things she probably never did. It was probably guilt about not being “perfect.” With Pisces rising and Neptune involved in her self- esteem issues, tension would become so acute, it would not be surprising that she would seek relief through some kind of mind-altering drug. She really had a difficult life, despite appearances.
Posted by Carole Devine at 4:45 AM