I meant to write about this last week, but I’ve just moved and have been extremely overwhelmed with getting settled, Christmas and regular astrological work. But, just under the wire (except in the eastern hemisphere), here is what I wanted to say about tomorrow, December 21, 2012.

Over a decade ago, I attended a lecture at the ARE about the Mayan Calendar and the Great Pyramid. John Van Auken showed us slides indicating that not only was the Mayan Calendar ending in 2012, but that the time line on one of the features in the Pyramid also ended simultaneously.

In a cartoon circulated widely, a Mayan says to a friend that he has “run out of room” on the circular stone tablet of a calendar he is carving and that it would probably “freak out a lot of people in the future.” That seems to be what has happened. Some of the proposed possibilities are quite far-fetched. We really don’t know what is going to happen, if anything. The truth is that there are several cycles the Mayans used, and they will all come together congruently at a new beginning point on December 21, 2012, and I’ve read, at 11:11 am EST. I’ve done a chart for this and used Washington, DC as the place, arbitrarily since a place is never really mentioned. That the cycles are ending and setting up a new series of major and minor cycles spanning thousands of years is all that we really know for sure.

The problem with this chart is that it isn’t the same system the Mayans used (about which I know nothing), so it is probably useless. However, we can see it as an “event” chart and read it from that perspective. The only things I can see that would indicate a rising of consciousness and/or vibration for humanity—which I believe has been going on for years and will continue—is the sextile between zero Capricorn Sun and zero Pisces Neptune, which not only rules the ascendant, but conjoins it on the twelfth house side, as well.

Neptune and Pisces (and the 12th house) are considered the indicators (when positive) of spiritual union. Zero degrees is a new beginning. A sextile is a positive opportunity, so perhaps the beginning of this set of cycles is an opportunity to begin a better connection to spiritual union with God and our brothers.

On the other hand, Venus is opposing Jupiter and both are square the ascendant. Jupiter and Venus in adverse relationship is over-indulgence and over-confidence (among other similar things), and when square the ascendant, there can be poor judgment about what to do with that. Saturn in Scorpio in the 8th house is trine the ascendant, so although there may be some wise guidance from “others” who are really in control and older (spirit guides?), the almost exact quincunx between Saturn and Jupiter could show an issue like this: Jupiter is ruler of the MC (authority) and since Sagittarius is on the MC, the authority could be our earthly religious or political leaders. Saturn in Scorpio and 8th house is sextile its dispositor, Pluto, almost exactly, and as mentioned, trine the ascendant. I’d say that secretly, there are going to be a lot of powerful, disciplined and persistent methodologies easily followed or offered, but that they will be at odds with our leaders. No connection whatsoever. It can be firm civil disobedience that is easily done.

There is a yod here—all at 8 degrees—of Jupiter at the apex to Saturn and Pluto. The yod is sometimes called “The finger of God” configuration and indicates a kind of compulsive energy. Jupiter is the ancient ruler of Pisces, so it rules the ascendant, too. Being in Gemini, the whole crux of this “event” is what we choose to believe, what we say, what we listen to, write and read. I think one result of all this is a plethora of “words.” It will take a very thoughtful and discerning person to be able to separate the truth from over-indulgence in ego. The Moon, after all, is in Aries in the second house, and this can be very lucrative for many—especially since the Moon trines Mercury in Sagittarius conjunct the MC.

In the end, our spiritual journey is in our own hands for the most part. If our vibratory rates rise, I believe it will be because of our own choices. We may have some assistance, but then, we always have, with our spirit guides. And lastly, we are in an illusion of our own making, so there will probably not be an external “something” that does anything. We wake up as we grow and realize the truth about our existence…that the only real thing is love and “fear” is the enemy. 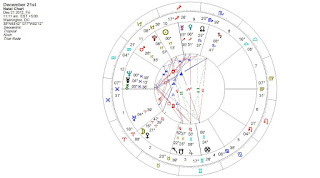