Recently we have been enthralled with the entrance of Prince George, child of Kate and William, in England. There has been much discussion about the Sun Sign since he was born with the Sun in the last minute of Cancer. Most astrologers use the Placidus house system, whereas I use Koch. This puts some planets in different houses, and that will make a difference in interpretation. The Koch system puts the Sun in the ninth house, but Placidus places it in the eighth. It’s going to be hard to tell the difference, though, because his stellium of planets, Jupiter, Mars and Mercury, are in the eighth and his Venus is in the ninth in both. We’ll see both at work.

My interest is in what this soul is here to learn. There is much evidence that he’s here to learn or express true compassion with concrete responsibility. North Node is in the 12th but conjunct Saturn. In a past life, with South Node in the sixth and in Taurus, there is the possibility that he could have been in some sort of service where he was rather precise about details which could have left the soul with a feeling of guilt—Saturn in the 12th. And he’s a “do-it-yourself” kind of person—common with people who have the South Node in Taurus. Granted, he has a great deal of nurturing energy with four placements in Cancer, but Cancer can be rather clannish. IF his Sun is in the ninth, Prince George will extend that nurturance to the world at large, but with the Moon in Capricorn in the third, he does not let his head get muddled in emotion. His memory is excellent, so he will not forget experiences, taking them very seriously, since most of his emotional impressions speak to his overall philosophical attitudes (Moon rules the ninth).

Secondly, regarding the compassion lesson, Venus is in Virgo (echoing the sixth house South Node), and indeed, it’s even the ruler of the sixth. It opposes Neptune in Pisces, and so there is a dichotomy between detailed analysis/following the rules (Virgo) and true compassion where we recognize the universality of all life (Pisces) and love unconditionally.

Scorpio is rising, and its ruler, Pluto, is in mutual reception to Saturn, evidence of a serious, hard-working person. This brings us to a very important secondary lesson. Pluto is involved in a T-square with an opposition to Jupiter, Mars and Mercury, and all four of those are square Uranus. This is difficult, but it is softened by also being part of a grand trine—and “kite” pattern. There are choices to be made. The lesson here is about his values as opposed to those of others, since the four in opposition are in the second and eighth houses.

Many years ago, I did the chart of an incarcerated bank robber. His eighth house ruler was in the second house, meaning that he saw “other people’s money” as his income. In this baby’s chart, it is the opposite. His second house ruler is in the eighth. Is it possible that he sees his income as “belonging to other people” and he uses it for their benefit? Keep in mind that the chart ruler, Pluto, is square Uranus in the fourth. He is an innovator and will be very forceful in his thought processes—easily bucking the status quo and sticking with his unique ideas. He could very well change the entire financial structure of the monarchy. That is one choice.

But, energies can be expressed in various ways. The negative side of this is using money and power (Pluto in the second opposing Mars in the eighth) to impose or “buy” other people’s co-operation. Since Mercury square Uranus can indicate attention deficit disorder and compensate in a “know-it-all” defensive demeanor, especially with Pluto involved, he will probably irritate a lot of people. I don’t think it will manifest in using money to control, though, because Mars and Jupiter—which show enormous energy put into worrying (Mars in Cancer) about others (eighth)—are in a grand trine with Saturn (responsibility) and Neptune (compassion). He does have a choice, but with compassion being a main lesson, too, it’s unlikely that he will be forgetting the less fortunate.

We are in a long term square between Pluto and Uranus, which shows the upheaval and urge to rebel that we are witnessing. Those born into authority at this time are going to be the ones who grow up to make permanent the changes we are envisioning. Whether or not Prince George is ever king is probably not important. What is important is that he will possibly be in a position to introduce an entirely new way of being our “brother’s keeper.” I like this little guy, and will be watching to see what he does with great interest. 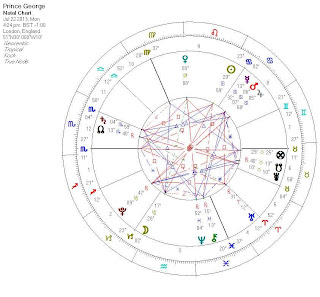