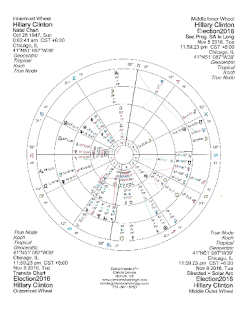 Since we do not have a firm, verified time of birth for Hillary Clinton, I looked at Chelsea’s chart to get an idea of what is going on. She was born on Feb 22, 1980 at 11:24 pm in Little Rock, AR.  She recently gave birth to a son when her solar arc ascendant was conjoining natal Neptune, ruler of her fifth house (Koch houses). Chelsea has Scorpio rising (very common to have one’s rising sign in the Sun Sign of the mother). I won’t speculate on her private life, but the day after the election, a long standing applying aspect of progressed Mars square Uranus is triggered by transiting Mercury. Her Uranus is 25:34 Scorpio. Progressed Mars on that day is 25:53 Leo, retrograde. Transiting Mercury is 25 degrees Scorpio the day before and after.  She is surprised and angry about something. However, it looks more domestic to me, although fourth house (which Uranus rules in her chart) can indicate her mother. There are other partile aspects, but they appear to be more concerned with her personal life.

Recently, I saw a post about Hillary having a Chiropractor in Massachusetts that she used while vacationing there. There is a rumor that she said she was born around midnight, so I rectified its possibility (aligning dates of events in her life for that time). One time that fit events was12:03:41 am. But, keep in mind that rectification is like educated guessing and there are several times a day a person can be born and the chart will “work” for events. The problem is that this one has Leo rising, and her 8 pm birthtime has her Scorpio planets in the fifth house, which is similar. This one also has the Sun in the third house which is similar to Gemini rising, which is her 8 am rising sign.

I won’t waste time on a speculative chart going into all the details, but I do want to point out some things that do not rely on the time of birth all that much. First, this summer her progressed Sun and Mercury are squaring Neptune. Now, in all fairness, that CAN be bewilderment, but it can also be deception when BOTH the Sun and Mercury are involved. They will continue to activate that position because the Sun and Mercury will go on to square the progressed Neptune. The evening of the election, Jupiter is activating all this…conjoining the pr Neptune. At that time progressed Venus is trining pr Neptune, as well. Venus rules the MC of this chart, transiting Uranus is trine Saturn.

However, the most disturbing thing to me is this: She has natal Mercury square Saturn. By solar arc, that has moved to be almost in aspect to her Sun. If this chart is right, then Saturn would conjoin the Sun about ten months after the election. In this chart, it would probably be a serious illness. (Sun rules the ascendant and Mercury the sixth house.) With the 8 AM chart, it would be secret behind-the-scenes political dealings (Sun ruling 9th, in the 12th where the Saturn would be by solar arc), and if the PM chart, probably something more personal…like a concern for family. This is not a small matter. She isn’t going to *like* whatever is going on, and it is serious. Mercury is also involved in it, since it will be squaring that position. Whatever houses Mercury rules (in whichever chart) will be involved as well. As far as timing goes, the later in the day she was born, the further away from the election it will be happening, but within two years after the beginning of the new president’s term.

Posted by Carole Devine at 9:50 AM