The eclipse and a word about Hillary


We had a lunar eclipse yesterday (9/16/16) at 3:05:01 EDT at Washington, DC.  The Sun and Moon opposition occupied 24:20 Virgo/Pisces. Anyone with chart positions within five degrees of that (including square aspects) will be most affected. The eclipse chart set for DC tells us a bit about the next year relative to the USA. There is a very close square from Mars to the Sun and Moon, forming a T-square. Since Mars rules the fourth house in this chart, it indicates anger of the populace, but with Mars in the 12th, it isn’t obvious. It COULD indicate some unexpected and violent weather patterns, especially since Uranus is conjunct the fourth cusp which is ruled by Mars.

Uranus is also opposing Venus—two degree orb, which could easily indicate some kind of unexpected upset regarding the leader of the country.

As most of you know, we are now in a long term square of Neptune and Saturn. This has the effect of bringing “discipline” to deception. AND, since they are forming a T-square with Mercury, we can expect quite a bit of discloser over the next year—probably centered around six to seven months from now.

However, I’m happy to see that Pluto is rising and well-aspected. Congress should be getting some serious work done by next summer, and with Jupiter in the ninth, we should have a pretty decent congress getting some work done, although it will probably be exaggeratedly reported as better than it really is (Jupiter rules 12th and is square the ascendant).

A few words about Hillary

I’m not going to get into a long discussion about her now, but just want to point out a couple of things. I had been frustrated by not having a good time of birth, but her recent health issue really brought the 8:02 a.m. chart into focus. There have been firm denials about her health, but looking at this chart, I have to wonder. Notice that the progressed Sun and Mercury are squaring natal and progressed Neptune, a signature of confusion and possible neurological issues. Most importantly, notice the progressed Moon exactly within a minute squaring the progressed Sun and Mercury and also right between the natal and progressed Neptune. Further, solar arc Uranus is within a half degree of the MC—professional upset—an awakening. Solar arc MC is also square her Mars/Pluto conjunction. I do not think she is in any condition to take on the presidency 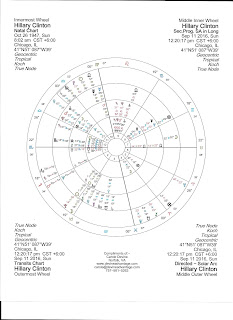